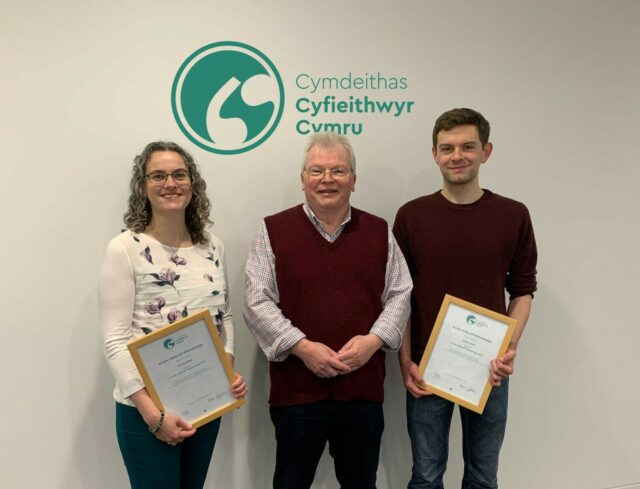 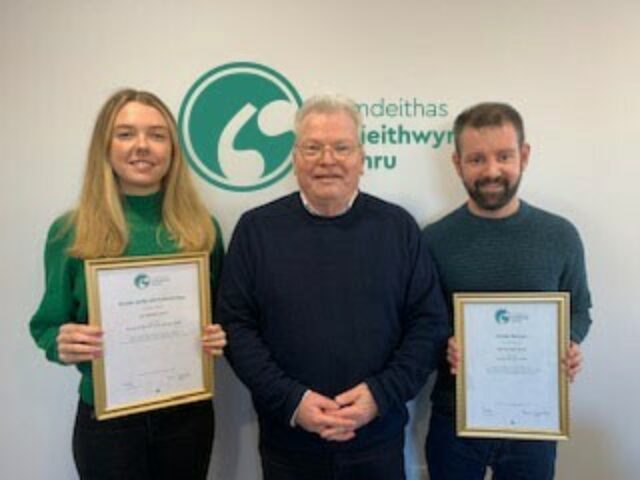 Our congratulations to the winners of the Association’s prizes in 2022 on the basis of their success in the Text Membership Examinations.

The winners of the Wil Petherbridge Memorial Prize were Morgan Owen, a translator at the Food Standards Agency at the time but now a staff member of Geiriadur Prifysgol Cymru (the only standard historical dictionary of the Welsh language), Jennifer Needs, a translator at HM Customs and Excise, and Lois Roberts-Jones, a translator at Cymen.

The Wil Petherbridge Memorial Prize is presented in memory of its former Secretary and a pioneer in English/Welsh translation. It is awarded to the most promising candidate for Basic Membership, translation into Welsh, if the required standard is achieved.

The winners of the Berwyn Prize were Siôn Pennant Tomos, a translator at Cymen, and Einir Lois Jones, a teacher considering becoming a translator.

The Berwyn Prize is awarded to the most promising candidate for Basic Membership, translation into English, if the required standard is achieved. It honours Berwyn Prys Jones, an inspiring leader in Welsh language translation, who was Chair of Cymdeithas Cyfieithwyr Cymru for over a quarter of a century.

Having been more flexible in awarding the prizes this year because the Basic Membership examinations had not been held since October 2019, we will revert to the usual practice in 2023 of awarding these prizes on the basis of the two rounds of examinations which will be held during the year (in April and October).

The Annual Report 2021-22 shows that Cymdeithas Cyfieithwyr Cymru succeeded in continuing to respond to the needs of its members, as well as undertaking the daily task of administering and organising the work of the Association. It was a year in which we slowly came back to normal, and we were able to hold some of our core activities: the Text Membership Examinations in October 2021 (at the Full level only) and workshops at the end of the year (each one virtually).

We also had the pleasure of welcoming Manon Cadwaladr as our new Chair. Manon has been a translator and an interpreter for over twenty years. She is a director of Cymen, a Translation company based in Caernarfon.

The Association was part-funded by the Welsh Government in 2021-22. We are very grateful for this support which allowed us to achieve the important work outlined in this report.

Once again this year, Cymdeithas Cyfieithwyr Cymru will be offering a scholarship of up to £1,000 to a student or students who have secured a place to follow the Professional Translation Studies at Aberystwyth University. Priority will be given to those students studying for the Diploma or MA, be that full time or part time. Candidates for the scholarship will be expected to translate a test piece as part of the application process.

The closing date for applications is 5 September 2022.

Guidelines and the text to be translated can be found in the information document (available in Welsh only).

Cymdeithas Cyfieithwyr Cymru’s annual lecture will be held in Societies 1 at midday on Thursday, 4 August 2022.

Mary Jones has chosen ‘Yn y dechreuad ...’, which translates as in the beginning, as the title of her lecture. Mary was one of the first translators to work in the Welsh Office’s translation unit in the 60s under its head, Moc Rogers of Ffair-rhos. She will provide a picture of the early days of Welsh translation.

Cymdeithas Cyfieithwyr Cymru’s annual lecture has, since 2002, been held in memory of Hedley Gibbard (1936-2001) as a mark of appreciation of his pioneering work in developing English<>Welsh translation and interpreting.

Cymdeithas Cyfieithwyr Cymru will also be part of three other events at the Eisteddfod, each one on the the University of Wales Trinity Saint David stand.

Cymdeithas Cyfieithwyr Cymru will not have a stand on the Eisteddfod field.

Cymdeithas Cyfieithwyr Cymru has written to those organisations who established the UK’s Ukraine language support task force in response to the war in Ukraine to express its support for this initiative.

The practical support offered by the task force includes making Ukrainian-English templates for the most commonly needed documents for visa applications freely available, and assisting the UK’s Ukrainian communities by opening of channels of communication.

Charity Translators, a volunteer organisation working with the charity sector, has drawn up a list of available initiatives and resources to support those affected by the war in Ukraine. A volunteer with Charity Translators is Cari Bottois, a PhD researcher in the School of Modern Languages at Cardiff University.

Further information can be found on the websites of the partner organisations, and we refer you to the Ukrainian crisis page on the ITI website.

Elan Grug Carter from Minera near Wrexham has been awarded the scholarship offered by Cymdeithas Cyfieithwyr Cymru to one of the students on the Professional Translation Studies scheme at Aberystwyth University.

Elan is studying full time for an MA which she is evidently enjoying,

‘I’m really enjoying the translation course in Aber,’ she said. ‘I feel that I’ve learnt loads already and am looking forward to the rest of the course.'

A former pupil of Ysgol Morgan Llwyd Wrexham, Elan gained a BA degree in Welsh at Cardiff University earlier this year. She also undertakes translation work on a casual basis for HMCTS.

Elan’s desire to become a translator started in her teens when she was a waitress in a restaurant near Wrexham when she realised that a lot of Welsh speakers visited the restaurant. As a result, she decided to translate all the menus into Welsh in order to promote the use of the language and increase the confidence of the customers to speak Welsh. This gave her enormous pleasure and seeing the change in the approach of the customers gave her a great sense of pride.

The Annual Report 2020-21 shows that Cymdeithas Cyfieithwyr Cymru succeeded in continuing to respond to the needs of its members and undertook the daily task of administering, organising and managing the work of the Association despite the restrictions but at a lower level.

From the outset, emphasis was given to keeping in touch with members and providing them with as much relevant information as possible and on responding positively to the circumstances in which we lived. The challenges of remote interpreting was one of these. Despite it being a year of cancellations and postponements, of not holding events and of not being able to welcome new members, it was possible to arrange some activities. The short translation e-workshop proved popular.

Most reassuring was that Covid-19 appeared to have had no impact on members' loyalty to the Association and the number of members remained high.

Covid-19 had a varied impact of on the work of translators and interpreters, some lost work, but many were busy. Things changed dramatically for interpreters and their professionalism in adapting to new ways of working deserves high praise.

In acknowledging his appreciation of the members’ contribution throughout these uncertain times in his Chair’s message, Huw Tegid Roberts said that this demonstrated our members’ ability to respond to changing situations and to adapt their ways of working. He also emphasised how the important role of translators and interpreters in seeking to convey information both accurately and accessibly became increasingly apparent.

Cymdeithas Cyfieithwyr Cymru was part-funded by the Welsh Government in 2020-21, and we would like to place on record our thanks for this support.

In July 2020 Nia Wyn Jones, Cymdeithas Cyfieithwyr Cymru’s Systems Manager, celebrated a very significant milestone, that of twenty years of working for the Association. When Nia started in her post she was the only full-time member of staff, Megan Hughes Tomos was a part time Director at the time. As the Association grew, so she came to enjoy the company of others of us in the office!

As those who are familiar with the Association know only too well, Nia has played a crucial role in its development during this time. Not the least of her many duties is the administration of the examinations and interpreting tests, ensuring they happen smoothly and efficiently. And they do!

To mark the occasion Ifan Prys wrote a delightful chain of ‘englynion’ (a traditional Welsh short poem form written in ‘cynghanedd’, the strict metres). In his ‘englynion’, which we have not translated but can be seen on the Welsh side of this website, Ifan has skilfully woven together the buildings which have been home to the Association since 2000, namely Aethwy at Bangor University; Bryn Menai, our office in Upper Bangor from 2001 until September 2019; and the present office in Intec, Parc Menai on the outskirts of Bangor.

We are grateful to Tonnau, Pwllheli, for the calligraphy and the framing of the ‘englynion’.

Cymdeithas Cyfieithwyr Cymru has written to Microsoft Teams (3 December 2020) urging them to move swiftly to a successful solution to the matter of providing interpreting as an integral component of Microsoft Teams.

Our letter emphasised that because it is not possible to provide interpreting in Teams Welsh speakers are being prevented from using their mother tongue in meetings. For interpreters, it has meant a serious loss of income in a year when the impact of Covid-19 on them financially has been brutal.

It is with great sadness that we heard of Mari Lisa’s sudden death.

Mari was one of the Directors of Cymdeithas Cyfieithwyr Cymru, an examination marker and a tutor, and one who contributed generously to the activities of the Association. As well as being a highly regarded translator, Mari was a novelist and poet. We will be the poorer for her passing.

As an Association, we extend our sincerest sympathy to Mari’s family in their sad loss.