“We are extremely pleased to have secured ‘cyfieithwyr.cymru’ for the association as this domain name was the obvious choice for us as one of Wales’ national organisations,” said Claire Richards, Chair of Cymdeithas Cyfieithwyr Cymru.

“As we celebrate 40 years since our inception, we are also pleased to be joining the increasing number of Welsh institutions, organisations and companies who have adopted the new .cymru domain name.”

From now on www.cyfieithwyr.cymru will be Cymdeithas Cyfieithwyr Cymru’s website address. Earlier this year the association launched a new website. It allows increased opportunities for its members to provide prospective clients with information about themselves and their services.

“It is extremely important for our members that we have a website which offers a variety of information about the profession as well as the means for people to search for a translator or interpreter,” said Geraint Wyn Parry, Chief Executive of Cymdeithas Cyfieithwyr Cymru.

“This new domain name will strengthen our position as we continue to work with public organisations and other professional associations for translators and Interpreters to raise the profile of the profession generally in Wales, in the UK and internationally.”

On Thursday at the National Eisteddfod in Abergavenny Geraint Wyn Parry, the association’s Chief Executive, addressed the annual meeting of the Wales Justice Network. The address was an opportunity to highlight one of the association’s key partnerships, namely its close relationship with the Welsh Language Unit of HM Courts & Tribunals Service to benefit the use of the Welsh language in courts and tribunals. This co-operation has led to effective arrangements for English/Welsh interpretation in the courts and tribunals in Wales, arrangements which are based on the professional standards that Cymdeithas Cyfieithwyr Cymru upholds and promotes.

Congratulations to Glenys Roberts on winning Translation Challenge 2016 into Welsh!

The Bardic Staff was presented to Glenys in a ceremony on the Aberystwyth University stand at the Monmouthshire and District National Eisteddfod, held in Abergavenny, by the Chair of Cymdeithas Cyfieithwyr Cymru, Claire Richards.

The association of Welsh translators and interpreters is pleased to sponsor this unique prize once again, and in so doing to acknowledge the craftmanship of Elis Gwyn who has carved the staff from a piece of wood from the Llanystumdwy area.

This year’s challenge was to translate the Spanish poem ‘El Conejo y la Chistera’ by the Mexican poet, Pedro Serrano. The competition was organized jointly by Wales PEN Cymru and Wales Literature Exchange, and sponsored by Swansea University's College of Arts and the Humanities.

In his adjudication, Ned Thomas praised Glenys Roberts for "her grasp of the syntactic resources of the Welsh language and her consequent ability to render the original text into natural-sounding and idiomatic Welsh". Glenys’ winning translation has been published on the website of the new Welsh literary magazine, ‘O’r Pedwar Gwynt’.

Thursday at the National Eisteddfod in 2016 was a day of great joy for Glenys and her husband Guto, who was awarded the Eisteddfod’s Science and Technology Medal. Our congratulations to Guto as well! 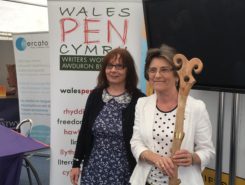 Forty years since the association’s inception, Cymdeithas Cyfieithwyr Cymru’s annual lecture this year features, appropriately enough, a look back over the past 40 years.The lecture will be delivered by Berwyn Prys Jones, Chairman of the Association for much of that period and a prominent and influential figure in the development of Cymdeithas Cyfieithwyr Cymru and the translation and interpreting profession/industry in Wales.

Back on 17 October 1976 thirteen translators met in Aberystwyth and decided that there was a need for a professional association of English-Welsh translators. At that time only about twenty people were employed as full-time professional translators. Berwyn Prys Jones wasn’t present as he was, at the time, a junior translator in the Welsh Office and left to man the office while his two colleagues, Moc Rogers and Mary Jones, attended the meeting. Moc and Mary were elected the first chairman and secretary respectively of the newly-formed Cymdeithas Cyfieithwyr Cymru.

In his lecture Berwyn will refer to the early days when the association was a voluntary organisation and how it developed into the professional association it is today, able, with grant aid, to employ a full-time staff. He outlines how an assessment and examination system was established in the 1990s, largely on the initiative of the late Wil Petherbridge, and how that examination system remains to this day an important core element in the association’s work. He emphasises Cymdeithas Cyfieithwyr Cymru’s continuing adherence to the highest standards of the profession, the leadership it has provided, its encouragement of professional development, its creation of the first directory of members and of the first website for English-Welsh translators and interpreters, and refers to the relationship it has developed over the years with other professional associations for translators and interpreters and with other Welsh institutions, including the Coleg Cymraeg Cenedlaethol.

Facing the future, Berwyn Prys Jones is confident when he states that:

“As Cymdeithas Cyfieithwyr Cymru reaches this 40-year milestone, one thing is certain. It has survived!

“Its staff and new Chair provide strong leadership and during the past few years a new generation of directors has stepped up to the plate. I’m confident that they will remain as solidly committed as their predecessors to the aims and aspirations of Cymdeithas Cyfieithwyr Cymru. They face an almighty challenge, especially since the introduction of the Welsh-language Standards, but the wellbeing of the translation and interpreting industry is safe in their hands.”

Thursday, 4 August, will be a day of translation activities at the National Eisteddfod.

The Hedley Gibbard Memorial Lecture, Cymdeithas Cyfieithwyr Cymru’s annual lecture, will be held in the Societies Tent 1, at midday.

Forty years since Cymdeithas Cyfieithwyr Cymru's inception, it is appropriate that this year’s annual lecture should look back over the past 40 years. And who better to deliver the lecture than Berwyn Prys Jones, Chairman of the association for much of that period, and a prominent and influential figure in the development of Cymdeithas Cyfieithwyr Cymru and the translation and interpreting profession/industry in Wales?

Before that, at 10.30am on the Coleg Cymraeg Cenedlaethol stand and in the company of Elin Jones AM, the new postgraduate qualification in Professional Translation Studies will be launched. There will be an opportunity to hear more about this innovative new course from its lecturer, Mandi Morse of Aberystwyth University. Further information can be found on the Coleg Cymraeg Cenedlaethol website.

Then at 3.00pm the Welsh Language winner of the 2016 Translation Challenge will be announced in a ceremony on the Aberystwyth University stand. This year’s challenge was to translate the Spanish poem ‘El Conejo y la Chistera’ by the Mexican poet, Pedro Serrano. The adjudicator was Ned Thomas. The winner will receive a prize of £250 and will be presented with the Bardic Staff. Cymdeithas Cyfieithwyr Cymru is pleased to sponsor this unique prize once again, and in so doing to acknowledge the craftmanship of Elis Gwyn who has carved the staff from a piece of wood from the Llanystumdwy area.

An invaluable experience – a day at the Assembly

The winner of the translation competition for the 19-25 age group at the Urdd Eisteddfod in 2016 was Ffion Pritchard.

Her prize was a day withthe National Assembly for Wales’ Translation and Reporting Service. A full programme of activities was arranged for her at the Senedd in Cardiff Bay on Tuesday, 12 July 2016. She had a taster of several aspects of the work of the Translation and Reporting Service, including seeing how the Cofnod is created, introductions to machine translation and interpretation, information about the Official Languages Scheme, and the opportunity to translate a piece of legislation. She also attended Questions to the First Minister in the Siambr.

Ffion was welcomed to the Senedd by the Presiding Officer, Elin Jones. She also met the Minister for Lifelong Learning and the Welsh Language, Alun Davies, and was accompanied by Sioned Hughes, Chief Executive of yr Urdd, a Geraint Wyn Parry, Chief Executive of Cymdeithas Cyfieithwyr Cymru.

Ffion’s lasting impression of the day was the work of of the interpreters.

“Listening to the interpreters showcase their talent was amazing. What a skill!”, she commented in her blog describing her day at the National Assembly.

Ffion hails originally from Aberdare. She graduated in Welsh at Cardiff University. She remained at the university where she gained an MPhil for a thesis on translating children’s literature into Welsh in 2015. Since 2013 she has worked as a translator for Rhondda Cynon Taf County Borough Council.

Interestingly, Ffion became a Basic Member of Cymdeithas Cyfieithwyr Cymru a year ago at the same time as Heledd Fflur Hughes, the winner of this competition in 2015.

Ffion’s winning translation, along with the adjudication by Mari Lisa, can be seen in ‘Cyfansoddiadau Eisteddfod yr Urdd Sir y Fflint 2016’, a publication which contains winning works in the Eisteddfod’s main literary competitions.

The translation competition is a partnership between the Urdd and Cymdeithas Cyfieithwyr Cymru. We are also very grateful to the National Assembly for Wales for their ready co-operation in providing a day’s work experience for the winner. 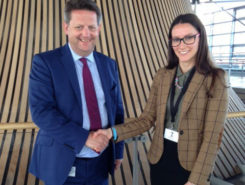 AMs encouraged to use resources to facilitate the use of Welsh

Cymdeithas Cyfieithwyr Cymru has sent a message to all members of the National Assembly encouraging them to take advantage of the resources and facilities available to them in the Assembly to ensure that the Welsh language is used naturally and frequently in the Siambr and in committee.

Evidence to the Working Group on the Welsh Language

Cymdeithas Cyfieithwyr Cymru has presented evidence to the Working Group on the Welsh Language in Local Government Administration and Economic Development, chaired by Rhodri Glyn Thomas AM, and which was established by the Minister for Public Services in December 2015. Information about the Working Group can be found on the Welsh Government's website.

The Association’s evidence – which is only available in Welsh – concentrates on the important role of translation and interpreting in the development and strengthening of the Welsh language in Local Government administration and the implementation of the Welsh language Standards. Cymdeithas Cyfieithwyr Cymru has made the following recommendations:

There was a warm welcome at the Wales Council for Voluntary Action office in Aberystwyth on Tuesday morning, 8 March 2016, when we held a delightful and informal ceremony to present the Wil Petherbridge Memorial Prize to Rhodri Owain, the WCVA translator. The prize was presented to him by Sandra Petherbridge and Mary Jones. 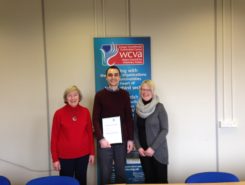 Translation Challenge returns in 2016, and once again Cymdeithas Cyfieithwyr Cymru has commissioned and sponsored the Bardic Staff which will be presented to the Welsh language winner.

This year’s challenge will be to translate the poem ‘El Conejo y la Chistera’ by the Mexican poet, Pedro Serrano, from Spanish into Welsh or English. The Welsh language judge is Ned Thomas, and Prof. Richard Gwyn will be the English language judge. The winning Welsh Translation will be published in O’r Pedwar Gwynt, and the English winner will be published in Poetry Wales.

The winners in both languages will receive a prize of £250. The Welsh language winner will also be presented with the Bardic Staff. Cymdeithas Cyfieiethwyr Cymru is pleased to sponsor this unique prize for the fourth time, and in so doing to acknowledge the craftmanship of Elis Gwyn who has carved the staff from a piece of wood from the Llanystumdwy area.